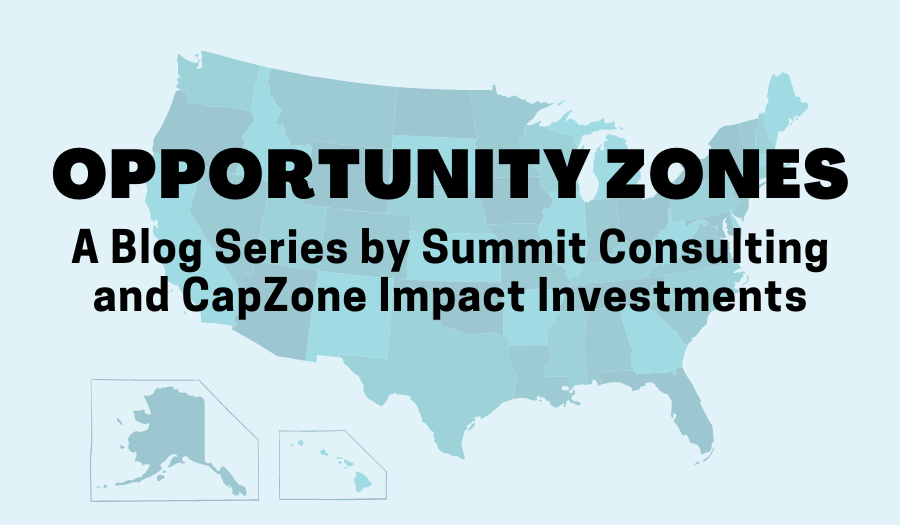 In our first post, we discussed proposed regulatory changes to the Opportunity Zone (OZ) tax incentive and how OZs continue to gain momentum with investors and political leaders. The introduction of OZs nearly four years ago had both investors and community stakeholders debating their potential impact, with uncertainty around investment timelines and concern over the displacement of existing residents. But as OZs continue to grow (investments in Qualified Opportunity Funds, or QOFs, reached $16 billion by the first quarter of 2021), the Biden administration has placed the OZ tax incentive, which aims to create jobs and economic opportunity in disadvantaged communities, front and center as a key component in advancing racial and economic equity through its Build Back Better plan. We’ve already seen proposals for two of the plan’s four components released in the last few weeks: the American Jobs Plan and the American Families Plan. An economic recovery proposal with OZs as a central driver may soon be on the horizon.

Photo by DiChatz on Unsplash

OZs Under the Build Back Better Plan

The two policy proposals recently introduced could indirectly promote greater OZ activity. The American Jobs Plan’s $2 trillion in infrastructure spending over the next decade prioritizes not only roads and bridges, but housing as well. The plan calls for multiple housing-related initiatives, including the removal of exclusionary zoning policies that limit density and impose restrictions on new development. A recalibration of these policies in communities across the country would make it easier to develop OZ projects, which have primarily been high-density, multifamily residential or mixed-use developments to date, in more census tracts not zoned for such development when OZs were selected. Even traditional infrastructure spending on roads, bridges, and water systems that directly benefits communities provides an incentive for additional development around them. To that end, the Department of Transportation has already announced that projects located in OZs will receive preferential treatment under some of its grant programs.

The American Families Plan would incentivize OZ investments in a different way. To pay for expanded access to childcare and education under the plan, the Biden administration proposed raising the capital gains tax from its current level of 20% to 39.6% for those earning more than $1 million annually. A near doubling of that rate for high-earning Americans could expand interest in the OZ program further as investors look for ways to reduce their tax liability.

OZ investing has benefited from a $34 trillion ESG investment global megatrend. ESG-factor investing refers to the consideration of environmental, social, and governance factors in the investment decision-making process, and it can take a few different forms. One type, ex-ante, integrates ESG measures into the investment screening process, leveraging negative screening of a potential investment based on the values of the firm or individual investor, active ownership, and thematic investing. Another, ex-post, evaluates the resulting impact metrics after the investment has been made. In both cases, ESG investment measurement models are most often criticized because they lack consensus and standardization around the measurement for a particular impact and can sometimes measure what is convenient as opposed to what matters. This is especially true when it comes to assessing how investments drive social impact, which remains the most elusive and challenging element to measure. Positioned at this intersection of policy goals and investor goals, OZs provide a platform from which to measure these social impacts over time and throughout the country.

Either by design or happenstance, the overall IRS reporting framework of the OZ incentive provides for high data quality and statistical reliability of social impact data in OZs at scale. Designated OZ tracts themselves will remain static until 2048, allowing for consistent location-based analysis of investment impact over time. To capture impact data, a QOF must include information about its investments in its tax filings using IRS Form 8996. Some of the data collected on Form 8996 includes the census tract of the investment, the business property owned within that census tract, and the Employer Identification Number of the Qualified Opportunity Zone Business in which the QOF owns an interest. Fund-level data like this is important to illustrate where investment is flowing. However, the current form has limitations in its ability to capture project-level impact. The inclusion of additional project-level reporting like employment outcomes, salary levels, and number of housing units produced or new businesses started provides impact data across specific industry sectors and socioeconomic segments and allows for more in-depth analysis and measurement ex-post.

As we discussed previously, newly proposed legislation would bolster OZ impact reporting requirements to enhance the program’s ability to track community benefit. Combining this data with underlying census information allows for additional analysis comparing OZ investments against changes in socioeconomic factors such as employment and homeownership. In other words, Form 8996 data combined with census data measures how much money went where and for what. This makes it possible to compare and contrast the impact of investments according to amount, place, and investment type (business, real estate development, etc). Even small changes, like adding the North American Industry Classification System code to the form, would also allow easy analysis of a particular sector, such as investment in manufacturing, across OZs nationwide.

Lessons from Other Tax Programs

Other federal tax programs provide a framework for how to report these social impact datasets. For instance, the CDFI Fund’s $5 billion New Markets Tax Credit (NMTC) program, while roughly one-third the present size of the OZ incentive and structured as a tax credit, has similar policy objectives to OZs regarding job creation and economic stabilization. Similar to an ex-ante ESG approach, applicants for NMTC allocations are required to document and report on how their investments promote job creation, access to goods and services for low-income residents, and other community benefits. QOF managers could implement such a screening via a survey instrument that clearly captures both quantitative and qualitative data on a potential investment. An ex-ante survey tool would detail baseline metrics around community engagement, job creation, and affordable housing production, allowing both investors and fund managers to measure the longitudinal impact of investments over time as projects come online. QOFs can further frame their intentional ESG goals by adopting a QOF impact statement or thesis that guides fund managers and investors toward impactful projects that align with community-based outcomes.

The NMTC program also collects data on investments ex-post, including many of the items discussed above (investment type, location, and investment amount), which the CDFI Fund then uses to draft comprehensive impact reports. Most importantly, impact data on NMTC investments are available to the public, allowing for greater transparency around the relationship between the program’s objectives and outcomes. Similar data transparency measures can help ensure that OZs avoid becoming vehicles for gentrification and community displacement and instead drive investments that increase access to jobs, infrastructure, and housing for low-income residents. With this framework, the OZ tax incentive can measure social impact on a large scale given the potential size of the market.

Even though proposals to address racial and economic inequality have yet to be released by the Biden administration, the OZ tax incentive and the projects it supports already stand to gain from the administration’s infrastructure and education plans. With some input from community leaders and finance experts, the consistency and governance of OZ project data could provide the groundwork to equitably measure the social impact of any of the four components of the Build Back Better plan in OZs. Our next post will look at ensuring OZ projects achieve the maximum impact in communities by partnering with Community Development Financial Institutions. Stay tuned!