With contributions by Olivia Hebner

Today’s post closes our three-part series on discrimination in mortgage lending and the analytical techniques that Summit uses to detect it. Part one discussed analytical techniques to detect redlining, the practice of denying loan applications to minority applicants based on the racial composition of neighborhoods. Part two examined loan pricing discrimination, the practice of charging higher interest rates to minority applicants due to their race.

In this installment, we talk about origination discrimination and predatory lending.

Origination discrimination is the practice of denying mortgage loans to minority applicants based on race. Predatory lending is the practice of giving minorities riskier loan terms. We typically use Home Mortgage Disclosure Act (HMDA) data, internal data from banks, and underwriting documents to find and estimate potential predatory-lending practices for our clients.

In the following two sections, we discuss the results of t-tests which determine the statistical significance of differences in loan origination and predatory lending based on race for single-family properties. We compare white borrowers to minority borrowers and then segregate the data by areas (census tracts) that have greater than or equal to a 50% minority population. The final section discusses the results of a logistic regression used to determine the impact of race on whether a borrower receives a risky loan.

One of the key variables of interest when examining data for discrimination is whether some individuals are more likely to receive a loan than others. A loan is considered originated if the applicant received it. Other outcomes could be that the applicant withdrew their application, the applicant did not accept the terms of the loan and withdrew, or the application was denied.

In our analysis, summarized in the table below, we compared origination rates between white and minority borrowers. Using t-tests, we found that overall, minority applicants were 7.6% less likely than white applicants to have their loans originated. In areas with at least a 50% minority population, minority borrowers are still 5.2% less likely to have their loans originated. Both of these differences were statistically significant at the 99% confidence level. 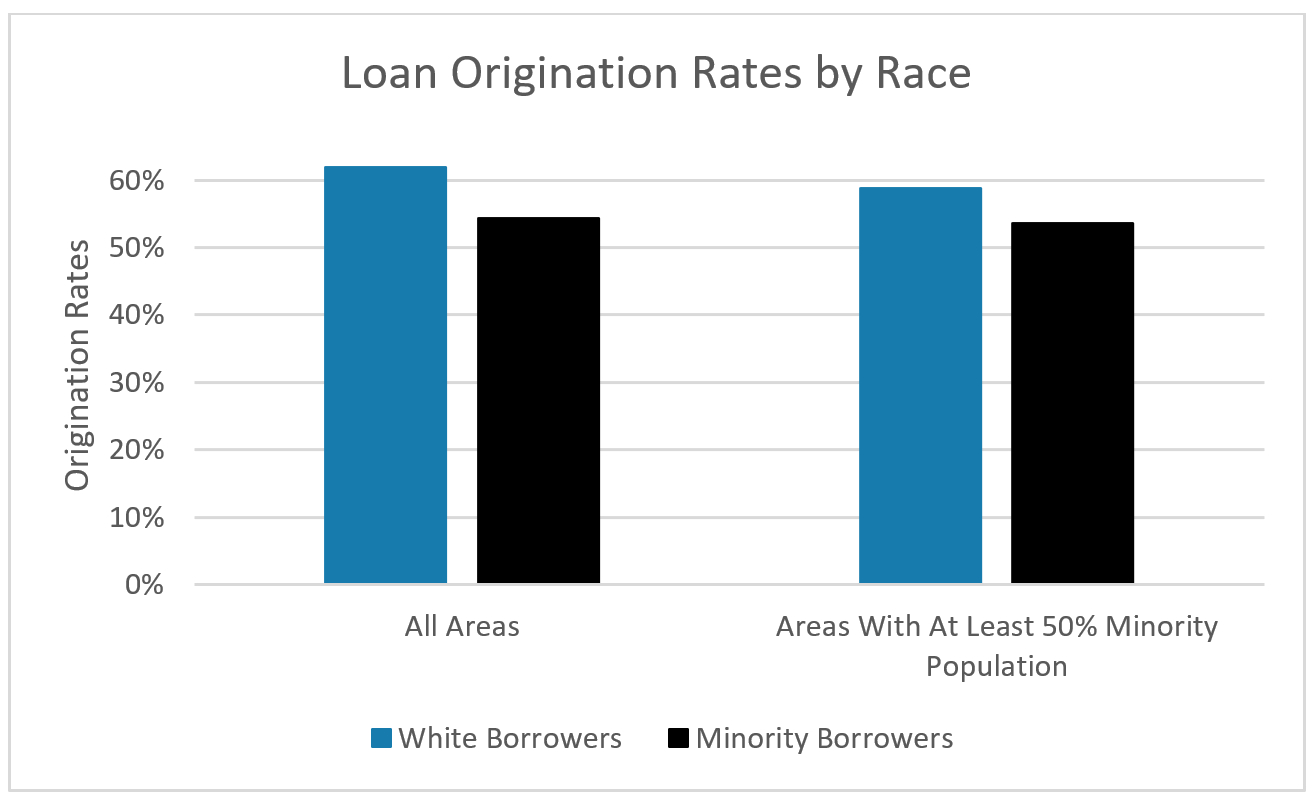 Another variable of interest when examining loan data for discrimination is whether some individuals are more likely to receive a risky loan than others. A risky loan, as defined by the Illinois Anti-Predatory Lending Database, is a loan that has any of the following attributes:

Overall, minority borrowers had a higher percentage of risky loans than their white counterparts (a statistically significant difference of 1.5% at the 99% confidence level). In areas of greater than or equal to a 50% minority population, that difference rises in magnitude to a statistically significant 3.3% at the 99% confidence level.

Regression modeling allows us to isolate the contribution and test the statistical significance for any one factor, such as race, to the likelihood of receiving a risky loan. For example, suppose you have origination data on borrower-specific qualities such as race, gender, combined loan-to-value ratio (CLTV), and debt-to-income (DTI) ratio.

We can use a logistic regression to determine the relationships between a borrower’s likelihood of receiving a risky loan and the borrower’s race, gender, CLTV, and DTI. This reveals that minority borrowers are 36.8% more likely to receive a risky loan, a statistically significant amount. In other words, the inclusion of additional relevant variables further increases the minority borrower gap.

This concludes our three-part series on discrimination in mortgage lending and the analytical techniques that we use to detect it. Summit’s mission is to deliver data-driven solutions to help make government effective and society just. We customize our approach and use a variety of statistical methods and techniques to help our clients identify and quantify discrimination in lending and further that mission.