Strength In Numbers: Sampling, A Powerful Tool in Expert Hands 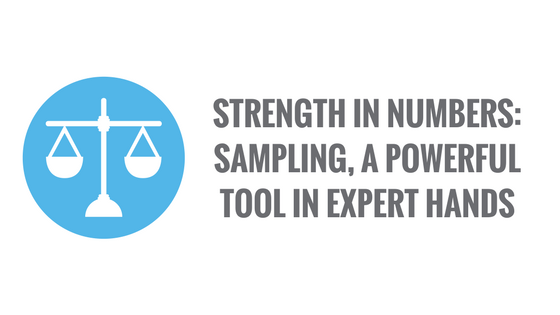 In the third post of this series, we show how statistical sampling could provide accurate and precise quantitative evidence cost effectively. You can find the rest of the Strength In Numbers blog posts here.

The key to a valid sample is a simple principle: each member of the population has a known and non-zero chance to be included. The purpose of this blog is to unpack this seemingly simple principle.

Because a sample (say, in the hundreds) can be much smaller than a population (in the hundreds of millions), it is much more cost effective to evaluate a sample than the population. Surprisingly, with a very large population, such as the population of the United States (about 320 million), it takes a very small sample (about 1,000) to achieve reliable conclusions. (See our previous blog post on sampling myths).

There are multiple ways to select a valid statistical sample. For example, a lottery is a statistically valid simple random sample. In a lottery, every ball has the same chance to be selected. Because of its simplicity, this is called a simple random sample. But a lottery is not the only way to selecting a sample. An alternative to a lottery is to create groups within a population before samples are selected from the groups. Frequently, groups are created based on similarity (say, groups of men or women). The latter is a stratified sample. 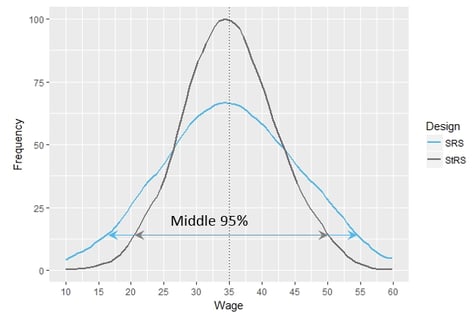 The graphic on the right compares wage estimates from a large number of simple random samples (SRS) to wage estimates from a large number of stratified random samples (StRS) of the same size, all drawn from the same population. As the graphs show, the StRS is similar to SRS with respect to the average estimated wage, about 35. However, estimates from the stratified samples are more likely to be nearer the center. As shown in the graphic, 95% of SRS sample (blue line) averages fall between 15.5 and 54.5, while 95% of StRS sample (black line) averages fall between 21 and 49.7, which makes the StRS estimates more precise.

In this previous blog post, we discussed the details of simple random sampling and some other designs.

At Summit, we pair subject matter experts with statisticians to serve our clients.

Quantifying the extent of fraudulent activities among claims is another example of leveraging information to improve sample design. In other projects, we used claim types to create groups (strata), taking advantage of the fact that claims are similar to each other within certain claim types but different from each other across those claim types. Further, we often create a separate group for claims with an amount greater than a certain large value to make sure those large claims are all included in the sample.

Statistical sampling can be a very powerful tool in the right hands. Selecting a sample may appear straightforward, but there are many pitfalls--careful statistical and subject matter considerations are needed to make sure the sample is both statistically valid and efficient.

[1] In stratification, the similarity within strata is only important with respect to the outcome of interest. For example, if we want to measure body heights, it is probably a good idea to group by gender, because women’s and men’s heights are generally likely to be different across those two groups, but similar within. However, if we are interested in some other metric, such the average daily commute time, we are probably better off looking for other grouping variables, such as urban, suburban, or rural residence.