How Do Opportunity Zones Differ from Existing Federal Tax Incentives for Community Development? 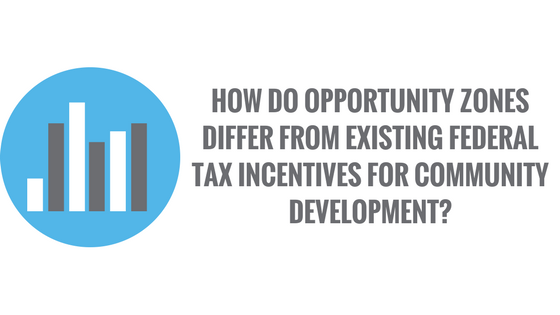 While there are existing federal incentives and programs meant to attract private investment in low-income communities through the tax code, Opportunity Zones differ from these programs because they are not limited by annual Congressional approval or tax credit allocation authority.

Though both NMTCs and Opportunity Funds lower the tax bills of participating investors, the potential for diverse and large-scale investor participation in Opportunity Zones is much greater because there is no need for annual Congressional approval or allocation of limited tax credits. The NMTC Program requires annual Congressional appropriation of tax credit authority, and is run by CDFI Fund staff who approve allocation of tax credits to applicant CDEs through a competitive annual award process. The CDEs who receive NMTC allocations then distribute these to investors in exchange for equity investments in CDEs, and the investors claim a tax credit worth 39% of the equity investment over seven years. (Read Summit’s deep-dive study of the NMTC Program here.)

The NMTC Program’s allocation process is similar to an older community development tax program created in 1986, the Low Income Housing Tax Credit (LIHTC) Program. Rather than a federal agency, as with NMTCs, state housing credit agencies in each state distribute an allocation of federal LIHTC tax credits (which is based on the state’s population) to developers of affordable housing. These developers can then claim tax credits over a ten-year period. The LIHTC Program also helps developers attract bank financing, because banks who fund LIHTC-funded projects receive positive Community Reinvestment Act (CRA) consideration.

If the U.S. Treasury decides to not require oversight or management of the tax benefit, a potential concern with Opportunity Zones is that a lack of oversight could create the potential for the benefits of these investments to accrue primarily to investors rather than to residents or businesses in low-income communities. For example, applicants for NMTC allocations are required to document and report on how their investments promote job creation, access to goods and services for low-income residents, and other community benefits. Lacking similar oversight, Opportunity Zones may become vehicles for gentrification and community displacement, rather than for investments that increase access to jobs and housing for low-income residents.

Lastly, the implementation rule to be written by the U.S. Treasury could shed light on whether Opportunity Zone investments will be allowed to be coupled with other federal tax incentive programs, such as the aforementioned NMTC Program and LIHTC, or other federally subsidized loan programs, like the CDFI Fund’s Bond Guarantee Program or USDA’s lending programs, and if so, how. Depending on the final rules published by the U.S. Treasury, Opportunity Funds could potentially attract equity investments by leveraging the qualified Opportunity Fund investment with other debt, including from other government guaranteed or subsidized lending programs. One argument for allowing, or even encouraging, such coupling of federal incentives for investment in low-income communities is that grants, subsidized loans, and/or other forms of investment incentives are often necessary tools to attract needed investment to distressed and low-income communities. However, allowing such “twinning” of federally subsidized programs could lead to unnecessary duplication of subsidy, increasing the need for additional oversight and active monitoring.