On January 2, 2018, NPR posted the article “Tax Changes Could Hurt Affordability At High End Of The Housing Market," The article details some potential effects of the recently signed Republican tax law (the Tax Cuts and Jobs Act of 2017,) on the housing industry. In the article, Mark Zandi, chief economist at Moody's Analytics, predicts that “by the summer of 2019, housing prices nationwide will be about 4 percent less than they otherwise would have been.” Borrowers with higher-priced homes and borrowers in “high-tax states such as New York, Maryland, Connecticut and California” would likely be the most affected. The article explains that the decline in house prices would likely be driven by a reduced mortgage interest deduction and a cap on state and local property tax deductions.

In this blog post, Summit’s housing experts provide an overview of how the new tax law may impact the U.S. Department of Housing and Urban Development (HUD) Federal Housing Administration (FHA) Home Equity Conversion Mortgage (HECM) Program. The blog post analyzes potential impacts on both the future volume of the HECM loans as well as claim losses from existing loans.

Overall the new tax law will likely have a negative impact on HECM volume – that is, all else equal, the volume of new HECM loans will likely be lower. The NPR article suggests that this reduction could decrease overall house prices and, in particular, higher priced houses; “capping the tax deduction will make housing more expensive to own at the upper end and could gradually drag down prices in that segment of the market in some places.” Furthermore, high-tax states such as New York, Maryland, Connecticut and California may experience a larger house price decline than other areas.  FY 2017 HECM endorsements are, both, (1) more expensive than similar non-HECM houses and (2) disproportionately concentrated in these high-tax states, likely making the house price decline stronger for HECMs houses than the average house.

The average price of a HECM house is much higher than the average price of house with an FHA-insured forward loan. According to FHA, in FY 2017, the average house price for HECM loans was $319,955, while the average house price for a forward mortgage was $201,337, (HECM house price is based on average Maximum Claim Amount (MCA), source: Annual Report to Congress Regarding the Financial Status of the Mutual Mortgage Insurance Fund Fiscal Year 2017. Furthermore, “the top three states for HECM endorsements, based on total MCA, were California (34.85 percent), Florida (7.25 percent), and New York (5.53 percent)” – two of which are ‘high-tax states’ that NPR mentioned.

If the new tax law were to cause falling house prices for HECM properties, lower volumes of HECM endorsements would likely result. House prices are the primary driver in determining the amount of equity a homeowner can receive from their home via a HECM. If a potential borrower’s house is suddenly is worth less, the potential borrower would not be able to extract as much money, in dollar terms – this will make them less likely to take out a HECM. Although the amount of equity received is determined on a percentage basis, oftentimes homeowners are motivated by a dollar value. For example, if an individual wanted to access $200,000 (40% of a $500,000 house), the potential decrease in house prices may prevent a potential borrower from accessing their desired amount of money (now 40% of a $480,000 home; $192,000). Because of these decreased incentives for homeowners to takeout HECMs, the average number of HECMs would decrease.

For existing HECMs, claim risk to FHA is likely increased if the new tax law decreases house prices, all-else-equal. FHA would incur greater losses on existing HECMs due to the increased risk of the outstanding loan balance surpassing the property value. The difference between the outstanding loan balance and the property value would be reimbursed to lenders via a FHA claim, as FHA is the insurer of HECMs. Below are three potential HECM scenarios and the corresponding impact of falling house prices on FHA claims:

In the first scenario, the property value (or Net Sales Value (NSV)) is significantly higher than the outstanding loan balance (or Unpaid Principal Balance (UPB)). A 4% decrease in the NSV would not cause a claim to FHA. This scenario does not lead to any claim losses for FHA because, even after the NSV decrease, the property value is still greater than the outstanding loan balance. That being said, the positive gap between the NSV and the UPB is now narrower; this increases the future risk that the loan may experience a claim (if NSV declines or UPB rises).

In the second scenario, the NSV of a home is not significantly greater than the UPB. A 4% decrease in the NSV causes FHA to incur new claim losses. As seen in the graph above, this occurs because the new property value drops below the outstanding loan balance. FHA is now subject to a claim from the lender to cover the difference between the property value and the UPB. 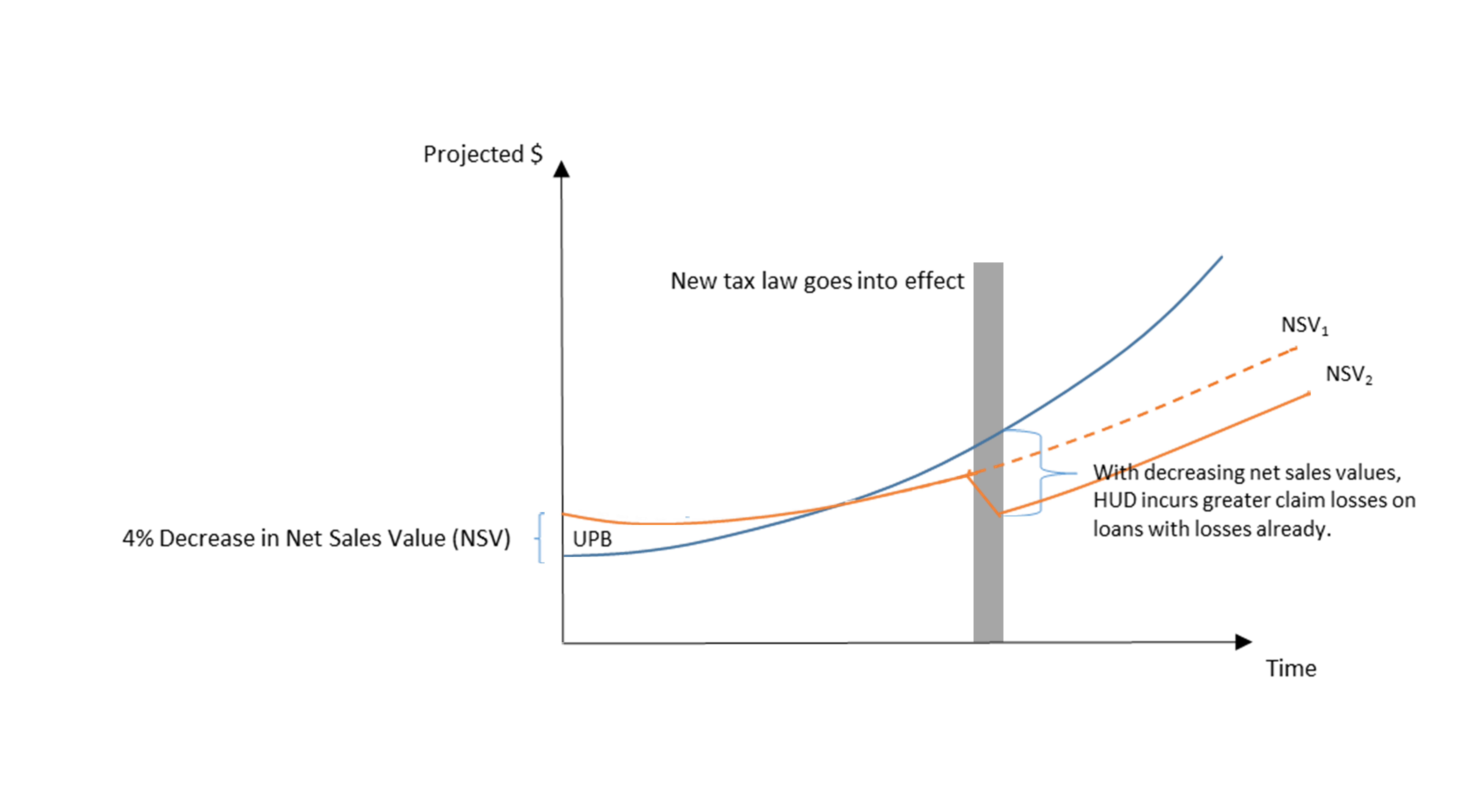 In the third scenario, the NSV of a home is less than the UPB. A 4% decrease in NSV further widens the gap between the property value and the outstanding loan balance, resulting in increased claim losses to FHA. While the scenarios show that not all cases would incur losses to FHA, the overall risk to FHA increases with declining house values.

Another repercussion of declining house prices for existing HECM properties is decreased opportunity for refinancing. HECM-to-HECM refinances are most common during times of high house price appreciation – allowing borrowers to refinance into a new HECM to access the newly gained home equity. Generally, HECM refinances are viewed as a good outcome for FHA, the loan insurer, given that there will be no claim losses resulting from the first HECM. Fewer refinances will extend the average duration of HECMs, thus increasing the claim risk to FHA.

In general, if house prices fall due to the new tax law, FHA would likely see decreased volume on future HECMs and increased risk on existing HECMs. The HECM program would, in turn, be less attractive to both the FHA and to the borrower. For future HECM loans, borrowers would have a smaller incentive to takeout a HECM. For existing HECM loans, FHA would be at risk to incur greater claim losses due to outstanding balances exceeding property values and potential increased durations of HECM loans. Overall, the new tax law could result in decreased house prices and a negative impact to the HECM program.