One year ago, I moved out of Alabama for the first time and quickly realized that I would not be able to keep banking at the local credit union where I opened an account when I was a kid. As I began searching for another bank, I discovered that there was no hub for banking information that took into account the consumer’s experience. Several online rating systems focus primarily on metrics such as the interest rate offered by the bank. However, with current interest rates near zero, income from checking account interest amounts to only a couple dollars each year. Why would a consumer make such a large decision based on this small amount of money?

To combat this issue, I pinpointed five metrics to quantify customer banking experiences and identified sources which spoke to each of these topics: 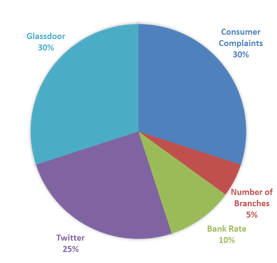 One of the most interesting tools I came across in this project is a sentiment analysis tool called VADER Sentiment, a Python package which quantifies the sentiment of text into a -4 to +4 rank, negative sentiment to positive sentiment, based on the definition of words and their contextual meaning.[1] Developed specifically for analyzing posts on microblogs such as Facebook and Twitter, this program also generalizes well to other texts and can be a useful tool for quickly quantifying the sentiment of normally exclusively qualitative text.

After gathering the data, I combined these five metrics based on specific weights to create an index by which to judge each bank. Each bank’s score is a weighted sum of the scores they got in each category:

To test this ranking system, I looked at the 26 banks and credit unions in Albany, New York and generated the index value for each institution. The ranking clearly delimits the differences among banks based on their scores, solving the information problem among consumers. This type of consumer-focused ranking system could offer a better way to find a bank that best fits each person’s need. 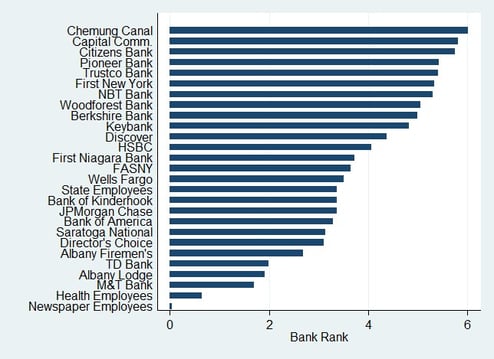