On September 2016, I attended the first annual White House Open Data Innovation Summit. This event brought together individuals from the government, nonprofit, and private sectors to talk about the future of open government data. 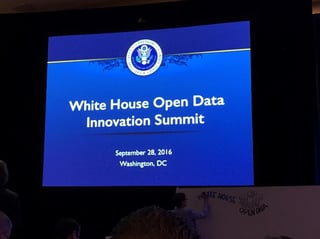 As an introduction to the current data environment, the audience heard multiple narratives focused on the relationship between data and the American story:

The takeaway from this event was not that the government should make more, publish more, or even use more data. The overall message was that government should use data to create solutions to society’s biggest challenges. Todd Park, former Chief Technology Officer of the United States from 2012 to 2014, effectively summarized this sentiment: “Data by itself is not valuable. It does not feed people. It does not save lives.”

At the same time, Park urged the audience to recognize that big data projects cannot be completed by the government alone. Often, the technical abilities in many government offices lag behind those in the private sector.

Shaun Donovan, Direction of the Office of Management and Budget and former Secretary of Housing of Urban Development, discussed how executive branch offices could maximize the benefit of public-private partnerships using big data:

After this event, I gained a new outlook on the relationship between consulting firms like Summit and the Federal government. While my work focuses on Summit’s commercial clients, I recognize the importance of our many teams who work on government contracts. As the Federal government becomes more ambitious with its data projects, it is going to rely on analytics firms like Summit to help process and analyze its data. Collaborations between the government and private sector have the potential to bring about real policy changes, resulting in a government that is more efficient and more effective for all citizens.